Just What Is “The Curse of the Law”? – Vince Szymkowiak – Good News Magazine

Just What Is “The Curse of the Law”? – Vince Szymkowiak – Good News Magazine 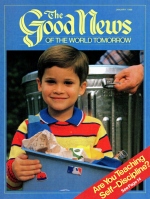