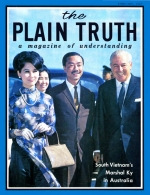 Modern education is failing to train young people adequately. The primary reason for this failure is that educators overwhelmingly have rejected God. They have failed to teach the purpose of life – that man is to learn to become like God. It is time we understood the facts behind the present educational system that grips the world. This world is sick! It is suffering from poison that is paralyzing the whole of society. This poison attacks the minds of our children. The poison is WRONG EDUCATION! …