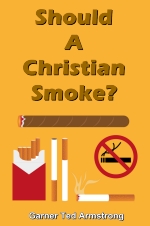 It’s true – smoking DOES cause cancer! Smoking IS injurious to health! Read, in this article, backed up by plenty of statistical PROOF, what your Creator says about smoking! It’s BIG BUSINESS Tobacco is the nation’s fifth largest cash crop, and the third largest crop for export. …