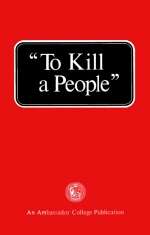 It’s not too late for America, but it’s later than you think. While millions sleep, history’s greatest single nation edges nearer an awful chasm. Drained by war, torn by crime, sick with drug abuse, ridden with immorality, driven with lust, stricken with senseless procrastination, lack of purpose, flagging loyalty, economic sickness and spiritual poverty, a great nation looks over the edge into chaos. WE DON’T know why we are. America has no great cause. There is no great goal toward which we unitedly press. There is no great single unifying bond, no common spiritual dedication, no deep, transcendental purpose for which we strive. …