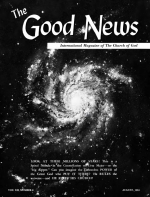 Now would you react to a miracle in your life? Would the effect be good or bad? Do you recognize all the miracles God has already performed for you? A PERSON WOULD certainly expect a miracle to strengthen his faith. Webster defines the word “miracle” as, “An event or effect in the physical world deviating from the known laws of nature or transcending our knowledge of these laws; an extraordinary, anomalous, or abnormal event, brought about by superhuman agency.” …