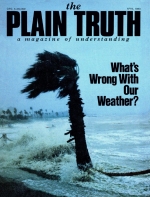 Personal from Herbert W Armstrong – The more I travel around the earth, the more I see the sickening conditions in the world today, and the more I glean from history, the more convinced I become that the real root cause of all of humanity’s troubles and evils may be summed up in six words: “They didn’t believe what he said.” And they still don’t believe what he says today! Suppose you had suddenly come into consciousness – just now having been suddenly created the first human being. Your Maker is sitting beside you, revealing to you vital knowledge so direly necessary for you to know. …