Should We Use The New English Bible? – Herman L Hoeh – Special Topics

Should We Use The New English Bible? – Herman L Hoeh – Special Topics 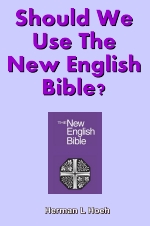