What Can You Do to GET ETERNAL LIFE? – David Jon Hill – Plain Truth Magazine

What Can You Do to GET ETERNAL LIFE? – David Jon Hill – Plain Truth Magazine 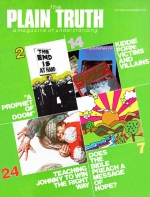 Fortunately for us, a young man asked Jesus about how to have eternal life – and we have Jesus’ answer recorded! Adam and Eve, way back there in the Garden of Eden, were told that they could have eternal life if they would just partake of the tree of life in the midst of the garden. Unfortunately, in the midst of the garden was also another tree which brought death. They made the wrong choice – egged on by Satan the devil – and each generation after them has continued in that wrong choice. Each generation in its turn has continued in that way of error – tens of billions of human beings – most never knowing the answer that would ensure them of life after death. But you can know the answer from the giver of life – Jesus Himself. Let’s eavesdrop on the conversation this unnamed young man had with Jesus about this most important question. Now, this young man was rich. He was well educated, and very well off. He probably had elderly parents whom he was taking care of, fulfilling all the requirements of young, rich, educated, religious men of his generation. But he lacked ONE thing – and he knew it. He had no insurance on eternal life! …