But by Prayer and Fasting – Worldwide Church of God – Special Topics

But by Prayer and Fasting – Worldwide Church of God – Special Topics 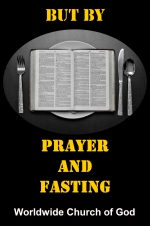 These are trying times. Make no mistake about it, we need God’s help and His direct intervention – now. For times such as these, the apostle Paul instructs us, “… be strong in the Lord, and in the power of his might. Put on the whole armour of God, that ye may be able to stand against the wiles of the devil.” …