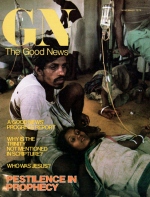 War, famine and disease: mankind’s three worst enemies. Much has been written about the first two. We are familiar with the chilling facts, statistics and pessimistic prognostications telling us about the possibilities of some future nuclear holocaust or worldwide food shortages. But what about disease? What does Bible prophecy have to say about the future? Will the human race ever be free from the curse of the grim reaper? Or will mankind once again be engulfed in a tidal wave of disease epidemics that will rival the worst ones of history? The world has yet to see the last of widespread disease epidemics. That, in effect, was what Jesus Christ told His disciples in the pivotal Olivet prophecy recorded in Matthew 24 and Luke 21. Right along with wars and famine came pestilence: …