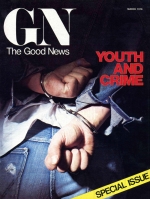 Never before in history have youth – the children of our nations – had such influence in the world, even to toppling and reestablishing governments. Though youthful oppression is promised at a time when world leadership has caused its peoples “to err” (Isa. 3:12), other prophecies promise a fantastic future for these same young people. Once they have been properly taught, they will have the most unique and challenging opportunity in history: to become leaders in the World Tomorrow under God’s government. Our world has lost its flavor. The spice is gone and in its wake is an extremely bland, unpalatable limbo of homogenized mediocrity. Individuality is found only in the garish glare of the myriad television sets reposed in their respective altar-like niches. Young minds – and old – are captivated by the magnetic strength and booming-character of a Matt Dillon, Ben Cartwright or the Six-Million-Dollar Man. …