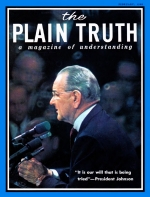 NO WONDER “religion” is utterly rejected by so many millions today. NO WONDER a broad segment of American businessmen and women cannot find ANYthing about “Christianity” to inspire and challenge them. NO WONDER hippies reject the time-honored “establishment” of our “spiritual heritage.” Here’s the TRUTH about a part of Christianity you’ve probably never heard before – the part about what it means to be a Christian! From the sudden upsurge in religion of the ’50s to the riots, demonstrations and hippie movements of the ’60s, the pendulum has swung from one extreme to another. Today, as never before, people are looking for something. Youth looks for some new, strong leader – a new faith, a new hope. Negroes look for broader rights, more acceptance, less prejudice. Government looks for ways out of Vietnam; for ways to stop the gold outflow and weakening of the dollar, and for solutions to the gnawing problems at home. …