Do You Want The Baptism By Fire? – Herbert W Armstrong – Special Topics

Do You Want The Baptism By Fire? – Herbert W Armstrong – Special Topics 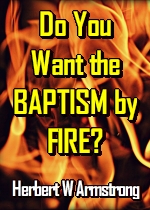 Often we hear one say, “I want that baptism with the Holy Spirit and FIRE.” Or: “I have the baptism with the SPIRIT, – now I want that FIRE! Do such persons know what they are asking? The common belief that we should desire that baptism with FIRE springs from texts showing God will purify and cleanse those who are His, by purging away the dross. And the Scriptures speaking of this purifying process usually speak of it as “purge away,” or “take away the dross,” rather than burning it away with fire. …