In Which World Are You? – Herbert W Armstrong – Plain Truth Magazine

In Which World Are You? – Herbert W Armstrong – Plain Truth Magazine 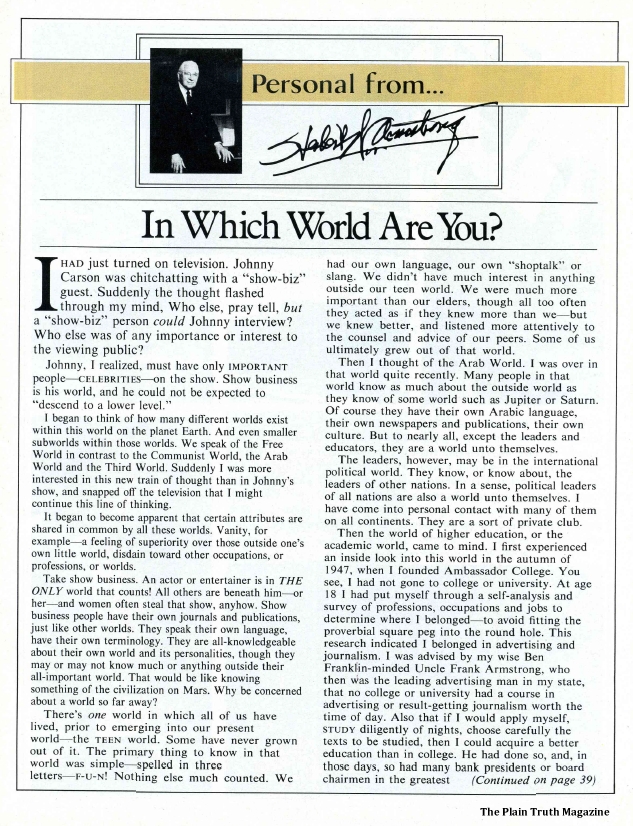 Personal from Herbert W Armstrong – I HAD just turned on television. Johnny Carson was chitchatting with a “show-biz” guest. Suddenly the thought flashed through my mind, Who else, pray tell, but a “show-biz” person could Johnny interview? Who else was of any importance or interest to the viewing public? Johnny, I realized, must have only IMPORTANT people – CELEBRITIES – on the show. Show business is his world, and he could not be expected to “descend to a lower level.” I began to think of how many different worlds exist within this world on the planet Earth. And even smaller subworlds within those worlds. We speak of the Free World in contrast to the Communist World, the Arab World and the Third World. Suddenly I was more interested in this new train of thought than in Johnny’s show, and snapped off the television that I might continue this line of thinking. …