WHO SAYS TIME IS CLOSING IN ON YOU? – Keith W Stump – Plain Truth Magazine

WHO SAYS TIME IS CLOSING IN ON YOU? – Keith W Stump – Plain Truth Magazine 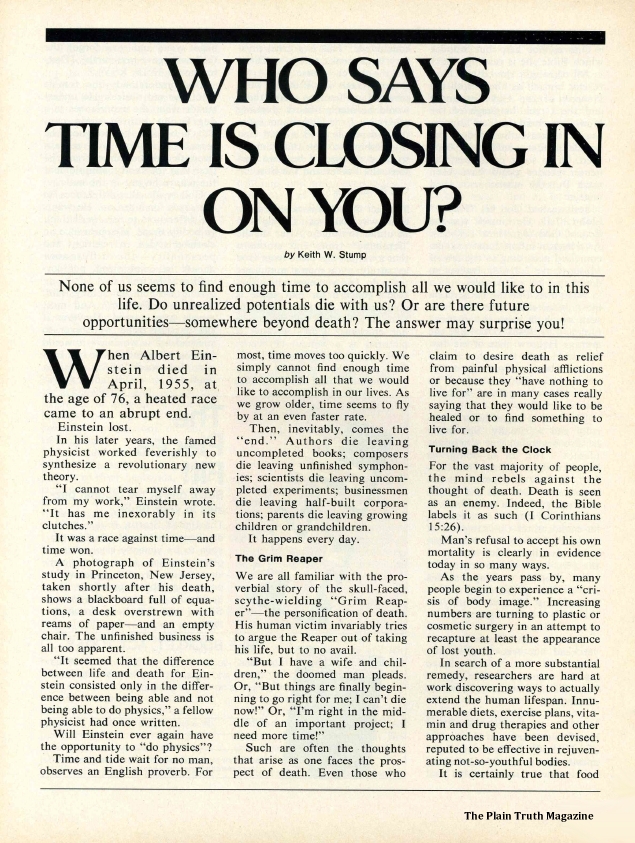 None of us seems to find enough time to accomplish all we would like to in this life. Do unrealized potentials die with us? Or are there future opportunities-somewhere beyond death? The answer may surprise you! When Albert Einstein died in April, 1955, at, the age of 76, a heated race came to an abrupt end. Einstein lost. In his later years, the famed physicist worked feverishly to synthesize a revolutionary new theory. “I cannot tear myself away from my work,” Einstein wrote. “It has me inexorably in its clutches.” It was a race against time-and time won. A photograph of Einstein’s study in Princeton, New Jersey, taken shortly after his death, shows a blackboard full of equations, a desk over strewn with reams of paper-and an empty chair. The unfinished business is all too apparent. …