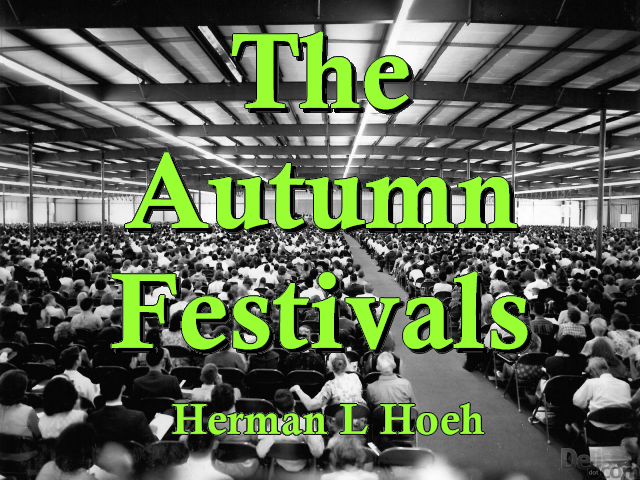 Now this evening there are a number of things that we might like to discuss with respect to the Holy Days, with respect to the upcoming autumn Festival. I thought that perhaps later in the evening we might have an opportunity to focus in some questions you might have not here before answered. There’re a number of ways in which one can analyze the question that has been presented to us this evening. I would start out by saying that we seldom realize that human beings are not as rational as we think ourselves to be. …

Herbert W. Armstrong (July 31, 1892 – January 16, 1986) founded the Worldwide Church of God in the late 1930s, as well as Ambassador College in 1946, and was an early pioneer of radio and tele-evangelism, originally taking to the airwaves in the 1930s from Eugene, Oregon. Mr. Armstrong preached an eclectic set of theological doctrines and teachings that came directly from the Bible. His teachings included the interpretation of biblical prophecy and taught observance of God’s Laws, Sabbath (Saturday), and the Biblical “Holy Days”.
View all posts by Herbert W Armstrong →
This entry was posted in Announcements & Comments. Bookmark the permalink.