HALLOWEEN: WHERE DOES IT COME FROM? – Wayne S Antion – Plain Truth Magazine

HALLOWEEN: WHERE DOES IT COME FROM? – Wayne S Antion – Plain Truth Magazine 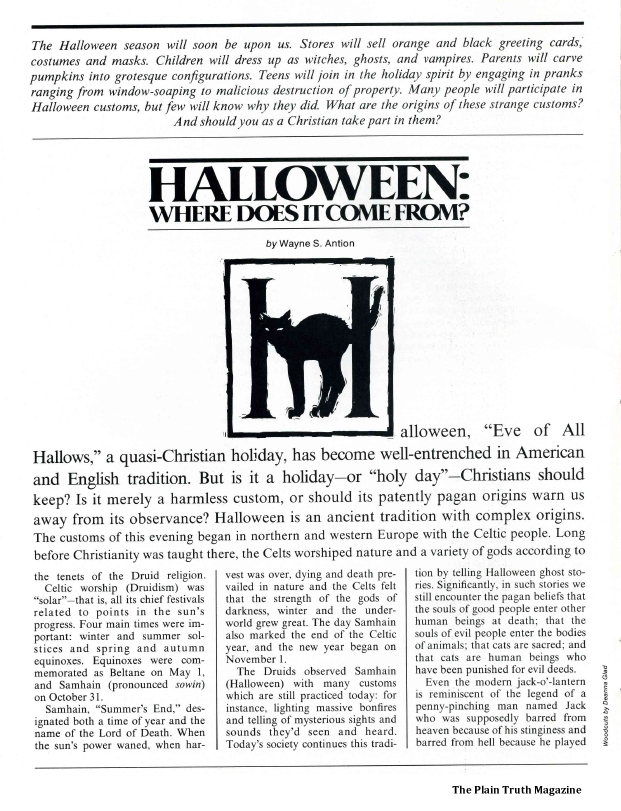 The Halloween season will soon be upon us. Stores will sell orange and black greeting cards; costumes and masks. Children will dress up as witches, ghosts, and vampires. Parents will carve pumpkins into grotesque configurations. Teens will join in the holiday spirit by engaging in pranks ranging from window-soaping to malicious destruction of property. Many people will participate in Halloween customs, but few will know why they did. What are the origins of these strange customs? And should you as a Christian take part in them? Halloween, “Eve of All Hallows,” a quasi-Christian holiday, has become well-entrenched in American and English tradition. But is it a holiday-or “holy day” -Christians should keep? Is it merely a harmless custom, or should its patently pagan origins warn us away from its observance? Halloween is an ancient tradition with complex origins. The customs of this evening began in northern and western Europe with the Celtic people. …