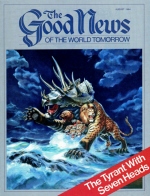 Can men actually communicate with departed spirits? What about the witch of Endor? What does the Bible say of spiritism? Is there anything to spiritism? Granted, there is trickery and deception. Houdini, one of the greatest trick artists of modern times, exposed numerous frauds. So also have Thurston, Walsh, Gearson and many another. Some leading spiritists have been convicted of plain dishonesty or common fraud and imprisoned. Yet not all spiritism is fraud or sleight of hand! When all the frauds, the tricks, the deceptions are carefully and scientifically sifted out, there remains something to be accounted for – some real SUPERNATURAL EVENTS that cannot be explained away! …