What Is the LAODICEAN CHURCH? – Leroy Neff – Good News Magazine

What Is the LAODICEAN CHURCH? – Leroy Neff – Good News Magazine 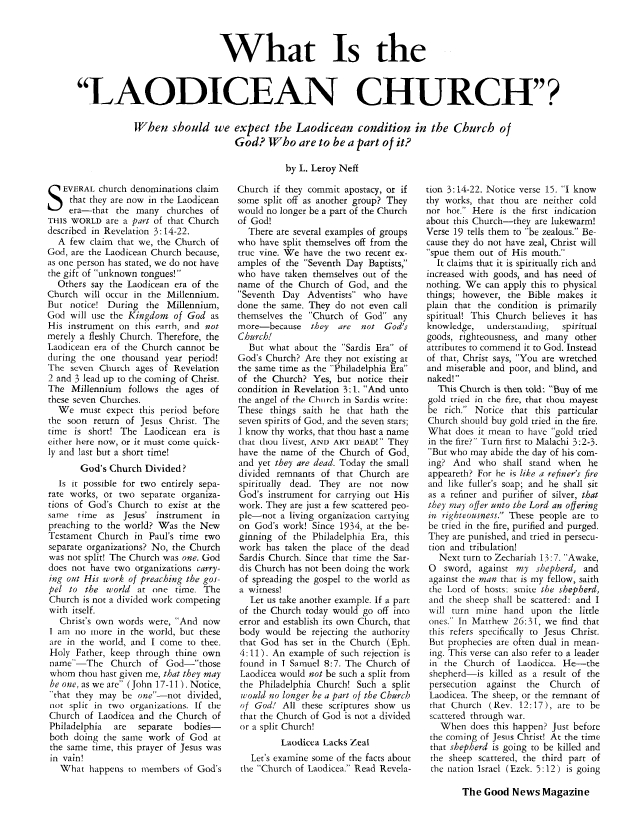 When should we expect the Laodicean condition in the Church of God? Who are to be a part of it? SEVERAL church denominations claim that they are now in the Laodicean era – that the many churches of THIS WORLD are a part of that Church described in Revelation 3:14-22. A few claim that we, the Church of God, are the Laodicean Church because, as one person has stated, we do not have the gift of “unknown tongues!” Others say the Laodicean era of the Church will occur in the Millennium. But notice! During the Millennium, God will use the Kingdom of God as His instrument on this earth, and nor: merely a fleshly Church. Therefore, the Laodicean era of the Church cannot be during the one thousand year period! The seven Church ages of Revelation 2 and 3 lead up to the coming of Christ. The Millennium follows the ages of these seven Churches. We must expect this period before the soon return of Jesus Christ. The time is short! The Laodicean era is either here now, or it must come quickly and last but a short time! …