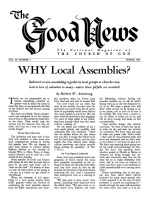 The Old Covenant is abolished. Then why turn to the Old Testament to learn which LAWS we are to observe? SINCE the old covenant is abolished, why refer to Exodus 20 to prove that the ten commandments are in force today? And, why refer to Deuteronomy 16 to prove how we ought to observe the annual festivals? To Leviticus 27:30 to prove that tithing is one of God’s laws for us today? …