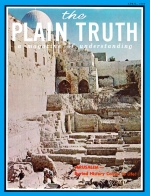 It’s resulted in a sick, sick world. But seemingly incredible, one college is now supplying that vital Dimension WORLDWIDE! There has been a tragic Missing Dimension in modern education. Ambassador College is pioneering in providing that Missing Dimension. This institution, therefore, is unique. It operates on a much larger scale than the three-campus liberal arts college limited to 700 students on each campus. It presents a far broader scope with educational activities worldwide. …