When You Say PRINCE OF PEACE Do You Really Know What You’re Talking About? – Jeff Calkins – Plain Truth Magazine

When You Say PRINCE OF PEACE Do You Really Know What You’re Talking About? – Jeff Calkins – Plain Truth Magazine 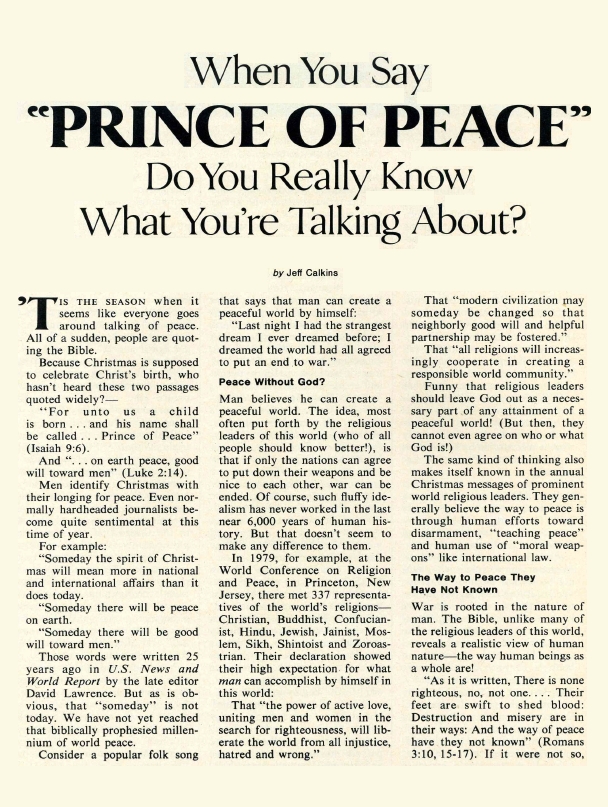 ‘Tis the season when it seems like everyone goes around talking of peace. All of a sudden, people are quoting the Bible. Because Christmas is supposed to celebrate Christ’s birth, who hasn’t heard these two passages quoted widely? “For unto us a child is born…and his name shall be called…Prince of Peace” (Isaiah 9:6). And “…on earth peace, good will toward men” (Luke 2:14). Men identify Christmas with their longing for peace. Even normally hardheaded journalists become quite sentimental at this time of year. For example: “Someday the spirit of Christmas will mean more in national and international affairs than it does today. “Someday there will be peace on earth. “Someday there will be good will toward men.” Those words were written 25 years ago in U.S. News and World Report by the late editor David Lawrence. But as is obvious, that “someday” is not today. …